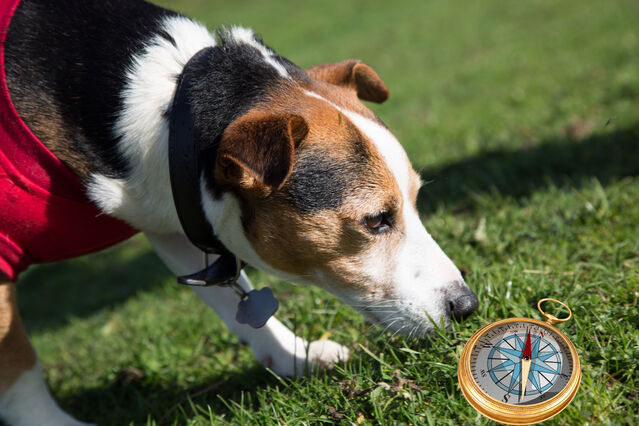 It seems that every year, the popular press reports dozens (maybe even hundreds), of cases where a dog was lost, or accidentally transported away from home, yet still managed to find its way back despite extraordinarily long distances. Whenever one of these reports appears, there is always speculation as to how the dog knew which direction to go.

Scientists have suggested the possibility that the dog might have some novel sensory abilities, perhaps allowing it to read the directional orientation relative to the sun, or to sense the polarization of light in the sky, or even the possibility that dogs can detect the magnetic flow between the poles of the Earth, which could then serve as a guide to navigation.

Among these possible explanations, the ability to detect the Earth’s magnetic field may not be as far-fetched as it seems since research has shown that honeybees have such a capacity with the aid of iron granules in their abdomen. Moving up from insects, it has been found that snails and frogs have some ability to perceive magnetic flow as well. Researchers have even found hints that some mammals, including mice and foxes, might also have this ability. But do dogs really have some usable capability to perceive magnetism?

The first hint that dogs might have a magnetic sense came from the laboratory of Hynek Burda, a sensory ecologist at the Czech University of Life Sciences in Prague. These studies showed that dogs tend to align themselves on the north-south magnetic axis when they are marking their territory by urinating or defecating.

Confirmation of this canine sensitivity to magnetism came from the laboratory of Sabine Martini at the University of Duisburg-Essen in Essen, Germany. His group of researchers were able to show that dogs could detect which sealed glass jar contained a magnetized metal bar.

Taken together, these two sets of studies seem to establish that dogs can detect magnetic fields, but is it really possible that this ability is being used by canines for purposes of finding their way around their environment?

For the answer to this, we must return to the laboratory of Hynek Burda in Prague. In this newest study, Kateřina Benediktová, one of Burda’s graduate students, initially put video cameras and GPS trackers on four dogs and took them on trips into the forest. The dogs would dash off to chase the scent of some animal for several hundred meters, as dogs will tend to do, and then come back.

The GPS recordings showed two types of behavior during the dogs’ return trips to their owners. One, which researchers called “tracking,” is when a dog retraces its original route exactly, presumably using the scent track that it had left on the outward run. The second type of behavior, which investigators called “scouting,” involved the dog returning along a completely new route without any backtracking.

When Benediktová showed the data to her Ph.D. supervisor, he noticed an intriguing feature about the scouting runs. In the middle of most of these, the dog would stop, turn, and then run for about 18 meters on a fairly exact north-south axis. After that dash, it would reset its direction and start to head back to its owner. The short runs looked like they involved an alignment with the Earth’s magnetic field, so these researchers tentatively called them “compass runs.” But of course, they needed more data to confirm this.

Benediktová and Burda eventually increased the sample size to 27 dogs and gathered data from several hundred trips over the next three years. They were fortunate that many colleagues in their department had hunting dogs which they volunteered to serve as participants in this study.

Ultimately, the researchers gathered data on 223 scouting runs and found that in 76 percent of these, there was a consistent pattern. Specifically, before a dog would start its return run, it would stop, turn itself so that its body was oriented the north-south axis, and then it would run for a bit less than 20 meters before once again turning — this time in a direction which would bring them back to their owner. For those dogs that made such a “compass run,” the investigators report that they tended to return to their owner using a more direct route than when they didn’t.

As I read this aspect of the data, I couldn’t help think of what happens to me when I am trying to find my way through a wooded area. I am not much of a frontiersman, so I always have a compass with me, and when I am trying to return to my starting point, I usually have to pull it out, stop and turn my body so that I am oriented toward the north, and then choose the direction which I think will take me back most directly. It made me wonder if the dogs that were running along a north-south line were doing the same thing as I did. In other words, while I needed a compass to mark the Earth’s magnetic field, they were trying to figure out which way they should go using their internal magnetic sense.

Of course, the researchers tried to rule out any possible confounding cues, such as polarized light from the sun, wind factors, and so forth. They even hid themselves behind trees or bushes so that the dog would not be cued in by a line of sight back to them. Doubtless, future research will involve seeing if this navigational behavior can be disrupted when you hang a magnet on the dog’s collar to interfere with their ability to perceive the Earth’s magnetic field.

We can speculate that if this built-in magnetic compass truly exists, then it probably is a holdover from ancient times when dogs were still a wild species. The main hunting grounds of wild canines, such as wolves, were often plains, savannas, and open grassland, where herds of its prey animals tended to graze. When the hunt was done, there were not a lot of landmarks to be seen in such open, flat country. This means that the ancestors of dogs could certainly have benefited from an additional directional sense which they might use to return to their dens and their pups once more. In that case, it seems that some sort of built-in magnetic compass would have certainly been a valuable addition to their sensory abilities.

Copyright SC Psychological Enterprises Ltd. May not be reprinted or reposted without permission.