The past three decades or so have produced a remarkable number of articles attempting to solve the mysteries surrounding the origins and nature of dogs, that polyglot horde of canines who share the lives of many of us more intimately than do our fellow humans, including, or perhaps especially, those of our own families. One area of robust debate involves the timing and nature of the divergence of one or more wolf lineages somewhere in the neighborhood of 16,000 to 140,000 years ago and is fueled by seemingly daily advances in the extraction and analysis of DNA from ancient fossils.

A few years ago while looking closely at the often contradictory findings, I decided that I could drive myself to distraction trying to reconcile each revision, or I could change my optic. I, therefore, assumed that the varying dates indicated that there was no single domestication event; rather, wherever they met on the trail of the big game they were hunting, humans and wolves got together. Figuring neither humans nor wolves had any incentive to accept a bad deal, l sought to discern who brought what to the metaphoric bargaining table—which is not to deny that many cultures routinely treat dogs most heinously.

It is perhaps unknowable how many of those encounters produced dogs or led to the mixing of wolf and dog genes. They might have included rendezvous where groups of the hairless bipeds gathered for trade, religious ceremonies, or other reasons, as well as encounters on the trail. Those meetings would have increased significantly, I assumed, as the world came out of the last glacial maximum and H. sapiens spread across the changing landscape accompanied by their dogwolves, “doglike wolves.” Whatever the circumstances of their meeting, wolf packs and groups of human hunters and gatherers were remarkably similar—extended families devoted to raising and educating their young cooperatively to fit into their society; protecting their homes and each other.

Despite natural affinities, cooperation was not automatic; it would require individuals who felt mutual affinities, who had the ability to understand each other, to bond. They would have been sociable and curious. To avoid problems associated with too much inbreeding or mortality, the dogwolves would mate with local wolves or perhaps wolves from other bands—if they could find them. Those meetings could have occurred at any time after early humans entered Europe and Asia, which date is routinely pushed back by geneticists studying ancient DNA and now stands at around 150,000 years ago.

I suspect a hunting “alliance” came first as ever alert and opportunistic humans began following wolves to their potential prey and then stepping in for the coup de grace, using their favored weapon for the kill, which was determined as much by custom and culture as efficiency. Wolves are adept trackers and skilled at holding their prey at bay. They are excellent long-range pursuers of game, but they are not the best closers on the planet. Just as human hunters would have benefitted from the superior tracker in locating potential and wounded prey, so wolves would have benefitted from teaming up with the sometimes profligate killer. Guarding food and village could have begun nearly simultaneously while pulling a sledge, or sled, or a travois—carrying a pack coming later because not all dogs take to hauling. 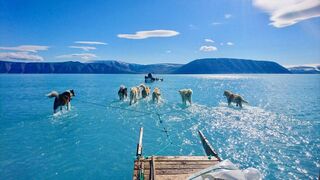 An article in the June 25 issue of Science magazine examines some of the genetic mutations in early dogs that helped them help humans settle above the Arctic Circle. Mikkel-Holger S. Sinding of the University of Denmark is first author for 35 canine geneticists of  “Arctic-adapted dogs emerged at the Pleistocene-Holocene transition.” The geneticists compared the genomes of 10 Greenland sled dogs with those of 117 other dogs, including three other types of sled dogs—Alaskan huskies, Siberian huskies, and Alaskan malamutes—a 9,500-year-old dog from Zhokhov Island in northeastern Siberia, a 33,000-year-old wolf, also from Siberia, and 30 modern wolves.

The researchers showed that all of the dogs adapted to the Arctic had originated in Siberia and were more closely related to the Zhokhov dog and to pre-European contact American dogs than to other dogs. They also shared genes with the 33,000-year-old Pleistocene wolf but not with modern wolves from the Americas.

Zhokhov Island was connected to the mainland 9,500 years ago and appears to have served as a processing center for reindeer and polar bear carcasses. Occupants of the village are believed to have used dog sleds to hunt and haul them. Some paleo-archaeologists have argued that the dogs were being bred by humans in or near the settlement while others have suggested that the humans were selecting dogs from a larger group that matched their desire, for example, for strong, big dogs to haul heavy loads or smaller, quicker ones to bay and harass bears while the human hunter killed it.

Arctic sled dogs and the Zhukhov Island dog diverged from a common ancestor sometime prior to 9,500 years ago. The dogs appear to have shared several mutations relating to pain and temperature detection and exercise in frigid conditions. After diverging from their common ancestor, Arctic sled dogs moved across the Bering Land Bridge with a group of humans, eventually reaching Greenland. Along the way, they appear to have picked up several mutations related to processing a fat-rich diet, an ability they share with other sled dogs, polar bears, and humans in the Arctic. That is just one of several examples of convergent evolution that the researchers point out.

The Greenland sled dog stands as a breed apart, a land race—a type of dog that develops in response to local conditions and human needs—for traction and hunting, for example, or guarding livestock. The Greenland sled dog has remained relatively unmixed with other dogs, even other sled dogs or wolves, and has survived at least one genetic bottleneck that threatened to throttle them around 850 A.D. But they might not survive the effects of sea-level rise and the ubiquitous snowmobile, which has made them an extravagance and put them on the path to extinction.

Alaskan huskies are at root Siberian huskies who mixed with European dogs from North America during the gold rushes of the early 20th century and to a lesser degree, during the resurgent interest in long-distance sled dog racing over the last 50 years. But the sport is buffeted by charges of animal cruelty, and maintaining a dog yard with up to 100 or more animals is expensive. Many observers believe that without racing, sled dogs might be relegated to the dust bin of history.